With the title ‘Language and Societal Challenges: the Role of Higher Education’, the European Language Council (ELC) held its Annual Forum at the Università Cattolica del Sacro Cuore in Milan in early December. The Department of Translation and Interpreting at Comillas is a full member of the ELC and attended this conference to learn about the latest developments in multilingualism promoted by this official organization which is supported by the European Commission and composed of language experts from many prestigious European universities.
The new President of the ELC, Dr. Manuel Célio Conceição from the University of the Algarve, presented the new structure of the organization and the three new working groups created to analyse the current linguistic situation in the European Union: Language and Science, Language and Education and Language and Rights. Lecturers from Comillas will be actively participating in each group and will keep you informed via this blog and the departmental Twitter account.
The ELC publishes the prestigious European Journal of Language Policy as well as working closely with other organizations such as the ECML and CERCLES. Currently its main focus is on multilingualism, and this topic was addressed in the keynote speech by Luca Tomasi from the Directorate-General for Education and Culture at the European Commission. Mr Tomasi gave a very interesting talk about the Commission’s language policy and the challenges and priorities involved. Among many other points, he highlighted the growing popularity of Spanish among EU students, referred to English as ‘a basic skill and no longer just a foreign language’ (stating that it was ‘unthinkable that English will not continue to be used as working language in the EU after Brexit) and pointed out that the language industry in Europe is currently worth approximately 16.5 billion euros! 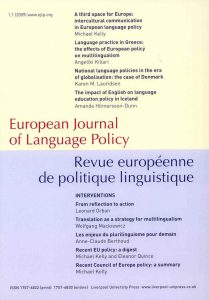 Another issue that was discussed at the conference was the situation of refugees (most of whom are minors) and the ELC advocated the need to reach out to schools and help them with the linguistic assistance required. The Conference also analysed the position of multilingualism in the field of science, and the general consensus was that ‘hard science’ will continue to be published almost exclusively in English although multilingual translation is needed for the dissemination of this information. Other topics debated were the importance of the media in promoting language learning motivation and the proposals to expand CLIL programmes and the European Masters in Conference Interpreting to Africa.