Some of the lecturers from the Department of Translation and Interpreting have just published a book entitled Literary Retranslation in Context.
The book is the product of several years of research by the RETRADES research project at Comillas Pontifical University and seeks to answer the following question: What is the interrelation between literary texts and their translations with the socio-historical characteristics of the period in which they were produced? The main conclusion reached was that there is not always a clearly identifiable relation between the importance of authors in their original culture and the retranslation of their work. 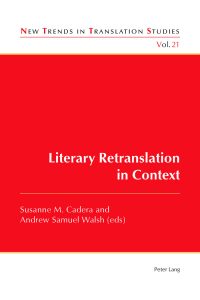 Indeed, in the case of peninsular Spanish, there are many instances of established authors from the canon of world literature whose work has not been retranslated at all. In other cases, the phenomenon detected was the precise opposite i.e. some authors such as Kafka have been retranslated so many times that it is difficult to carry out a detailed study of the differences between all of these retranslations. In several chapters in the book, special consideration was also given to the retranslations published during Franco’s dictatorship due to the possible manipulation that these texts may have endured because of the censorship system in place at the time as well as the possibility of self-censorship that was widely practiced to avoid problems with the regime.The book begins with a meta-theoretical chapter and is then divided into three thematic areas: Retranslation and Ideology, which includes chapters on the English language translations of Federico García Lorca’s Poet in New York and the Spanish retranslations of authors such Truman Capote and James Baldwin, Retranslation and Censorship, composed of chapters on the retranslation of post-colonial literature such China Achebe’s Things Fall Apart, the first censored edition of Italo Svevo’s La coscienza di Zeno and the Spanish translations of Le Journal d’une femme de chambre by Octave Mirbeau and Retranslation and Reception, with chapters devoted to an analysis of the thirty-one translations into peninsular Spanish of Franz Kafka’s Metamorphosis, the Spanish retranslations of Georg Büchner’s Lenz, and the reception of both James Macpherson’s Ossian and Goethe’s The Sorrows of Young Werther in Spain.